Energy Australia are doing some work in Barlow St. Sydney.

Their contractors(?) have uncovered some old Tram tracks. I managed to get a photo of one the rails and a partly visible sleeper. 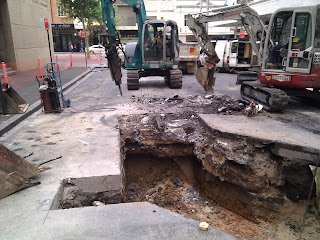 I asked the friendly contractors for a small piece of rail - worth a try I think.
Posted by phil at 22:35 No comments: Links to this post

After almost 4 weeks, our blue-green stain has not returned.

Treated Tank Water Alkalinity
The addition of 1000 mL of lime raised the pH to nearly 11. Over time this has reduced to below 10 since about 10,000 L of new rain has been collected.

Rain Water Alkalinity
I also noted that the rain water had a pH of about 6. This was a little surprising since our tank water was pH 4.5.
Stale Treated Tank Water Alkalinity
In monitoring the treated tank water I have found that the alkalinity of the water decreases to nearly 7 when left for 24 hours or more. I suspect that this is due to the water absorbing CO2 from the air and this may also explain why rain water has a higher pH compared to our tank water - if left, the pH increases as the water absorbs CO2.

CO2 Absorption of Large and Small Bodies of Water
To help confirm this theory, I left two containers of treated tank water to stand. One was over 300mL (pH=9.94) and the other was less than 60 mL (pH=9.83). Both containers had similar surface areas. The idea is that given the similar surface areas, the two systems would absorb CO2 at the same rate but due to the different amounts of water, the larger body would change pH more slowly. This is what I observed: the smaller decreased pH to 7.17 in less than 24 hours. The larger body had a pH of 7.36. Not much difference, but the temporal reading indicate that the larger body of water lags the smaller.

Note: Although the two samples should have started with the same pH I suspect the smaller sample had already absorbed significant CO2 before I measured it. This was about 15 minutes.
Boiled Water
I also boiled some treated water, let it cool and checked its pH. The water was originally about 9.6 pH. After boiling it dropped to about 8 pH. I have no theory for this at present.
Posted by phil at 22:32 No comments: Links to this post