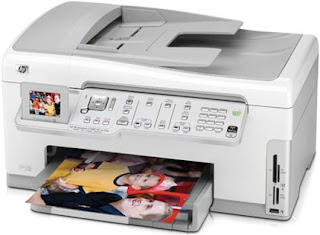 UPDATE: We had another paper jam recently and it caused what seemed to be this same fault. Moving gear back to it's correct position solved problem.

I had this problem today.

Ink System Failure... 0xc05d0381 (I did get another code after resetting the printer as well.)

It may have started two days ago when our first piece of paper jambed.

Note to self: when removing jammed paper, reassemble the pieces to see if you got it all out.


It worked fine today, but tonight it started making horrid gear-grinding noises. Then I got the 'Ink System Failure' message. 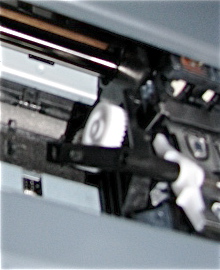 I tried a number of suggested remedies (see the 'fixyourownprinter' forum) but all they succeeded in doing was to factory default my printer - now I had to re-enter that very long wireless router SSID code again.

But it is such a pleasure with the HP Setup UI (did any HP tester actually use it? The input field doesn't even show all the characters so the last 3 are entered blind!)

After several power cycling events, I decided to investigate. I noticed how the ink pumps on the print head seemed to work - a black arm attached to a white gear is allowed to rotate about 1/2 a turn. The black arm is connected to a metal shaft which rocks a spring-steel sheet that depress some rubber boots. Like you might have on a lawn mower. 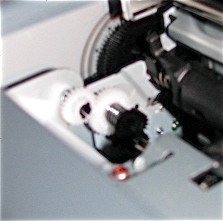 The printer head can move all the way to the left. When it does, the gears engage with some other gears to drive this pump.

In the picture you can see 2 white gears in the middle of the picture. The left one can rotate around the larger one and can rest in two possible positions.

Now my printer complained that I had a jam. And indeed, I still had a small piece of paper stuck in the area where the head parks itself.

I removed it with chop-sticks and all was well. The printer cycled ink through the cartridges and was happy again.
Posted by phil at 23:13